How Dreams Can Become Art 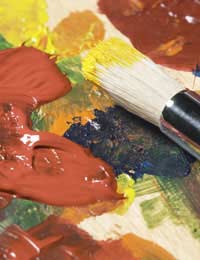 Did you know that certain pieces of art have been inspired by dreams? This phenomenon is known as Dream Art. It can also include art that uses dream-like imagery; however there are many important pieces of art that you may not realise were inspired by the artist's dream.

The History Of Dream Art

Artwork has referenced dreams for thousands of years. The story of Gilgamesh, the Bible, and the Iliad all speak of dreams and their meanings. However, dream art didn't come about until much later. During the Romantic Movement, visions seen during dreams then used as material were viewed as being representative of the artist's highest potential. Symbolism and Expressionism of the late 19th and 20th century also used dream imagery. It was August Strindberg, a Swedish writer of the Expressionism literary movement, who was the first to coin the term 'dream play,' one that did not distinguish between fantasy and reality.

Through the years, a wide range of artists has used their dreams as inspirations. Even comic books and comic strips have explored dreams, most notably Winsor McCay's 'Little Nemo' in which the character always awoke from a dream in the last panel.

As far as visual art - painting, photography, printmaking, and filmmaking - goes, there are several artists who have been inspired by visions in their dreams. Of his painting 'Dream Caused by the Flight of a Bee around a Pomegranate a Second before Awakening,' Salvador Dali said it was intended to express Freud's discovery of the typical dream. Dali also delved a bit into filmmaking. He was responsible for the dream sequence in Alfred Hitchcock's Spellbound, which explores the themes of psychoanalysis.

It is said that Mary Shelley got her inspiration for 'Frankenstein' from a dream. She and Percy Bysshe Shelley were visiting Lord Byron in 1816. Cooped up inside due to cold and dreary weather, the group read ghost stories then challenged each other to compose their own scary tale. Mary had a dream in which she saw a student kneeling next to a 'thing' he had created. That vision was the basis for 'Frankenstein'.

Samuel Taylor Coleridge's 'Kubla Khan' (subtitled A Vision in a Dream) is believed to be based upon a dream or hallucination inspired by opium use. Robert Louis Stevenson, intrigued by the idea of the duality of human nature, dreamed of two or three scenes that would later appear in his classic 'The Strange Case of Dr. Jekyll and Mr. Hyde'.

In film, Andrei Takovsky (Mirror), Sergei Parajanov (Sayat Nova and Shadows of Forgotten Ancestors), David Lynch (Blue Velvet, Lost Highway, and Mullholland Drive), and Federico Fellini (Amarcord and 8 ½) all use their own dreams for inspiration or featured dream-like sequences in their work.

Even music is inspired by dreams. Paul McCartney is said to have composed the entire melody for the Beatles' hit 'Yesterday' in a dream. Upon waking, he immediately went to the piano and played the tune into a tape recorder to keep from forgetting it. The instrumental piece 'La Villa Strangiato' by the band Rush was inspired by guitarist Alex Lifeson's dream.

The subconscious mind has no boundaries, therefore artists, to create totally uninhibited works of art, often use dreams and visions as inspiration.

The History And Use Of The Dream Catcher
Share Your Story, Join the Discussion or Seek Advice..
@babycake - some dreams we have can make us feel really insecure especially a dream like this. But it doesn't actually mean anything as dreams can be very spontaneous and come seemingly from nowhere. Once the dream fades from his consciousness in a few days, he should begin to forget all about it. In the meantime all you can do is reassure him that it's just a dream that has no substance whatsoever.
Sal - 5-Dec-14 @ 10:46 AM
my boyfriend dreamt that he caught me having sex with my ex partner in his mum's house, he's now convinced there's something going on between us.. i would like to know what it means and why he would have such a dream. we've been together for 4 years.
babycake - 4-Dec-14 @ 2:09 PM
Title:
(never shown)
Firstname:
(never shown)
Surname:
(never shown)
Email:
(never shown)
Nickname:
(shown)
Comment:
Validate: